We celebrated Hanukkah with songs, games, bingo and sufganyot.

In Year 1 we finished up our learning on the Shema by thinking about the prayer of Ahavah Rabbah before the Shema. This is about love, as Ahavah means love in Hebrew. We cut out and decorated the Hebrew letters which make the word Ahava, in the same style as the LOVE sculpture in the Israel museum in Jerusalem.

Year 2 are thinking about ways to show our gratitude to the people around us. 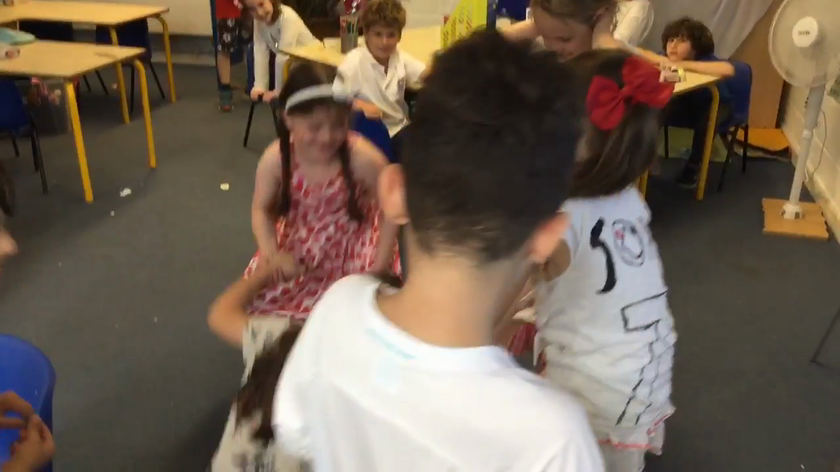 In Year 1 we have been learning about the Shema. We are thinking about rewards, punishments, and rules, because this is what the second paragraph of this prayer is about. Some of our answers are very thoughtful!

Cantor Sarah from Radlett Reform Synagogue came in to speak to Year 6, and brought her own special guest of a Torah scroll! We asked lots of questions about b'nei mitzvah ceremonies, such as how it feels and how long it takes to practice, why to have one and what happens if we make a mistake, as well as lots of questions about the Torah scroll itself. She very graciously answered all of our questions and shared her wisdom with the class.

In Year 4 we are learning about the Messianic Age and considering our perfect world. Children imagined their own perfect world, and were very thoughtful in their descriptions of it.

Year 3 had great fun making and breaking codes, all of which were different to our partners' codes! This helped us to think about why it is useful to all speak the same language, and how that affected Jewish immigrants to Israel (who all spoke different languages until Eliezer Ben-Yehuda created Modern Hebrew). 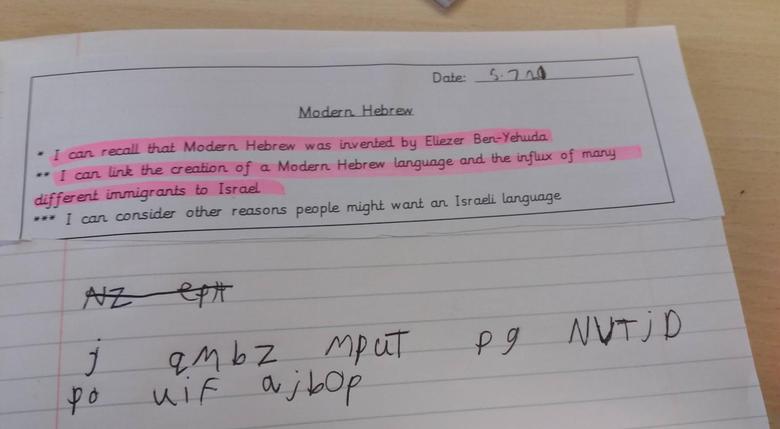 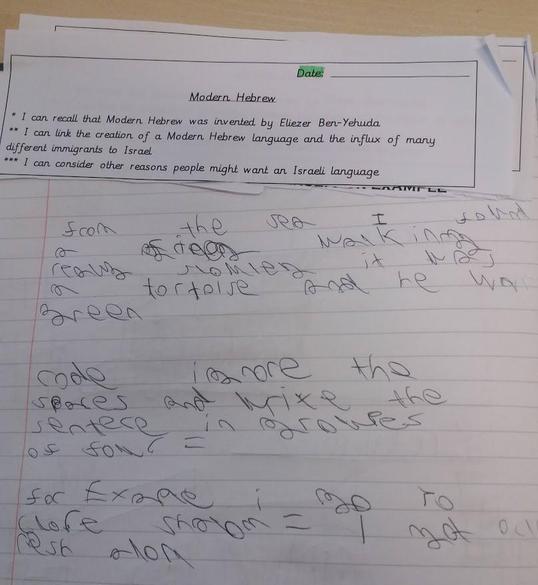 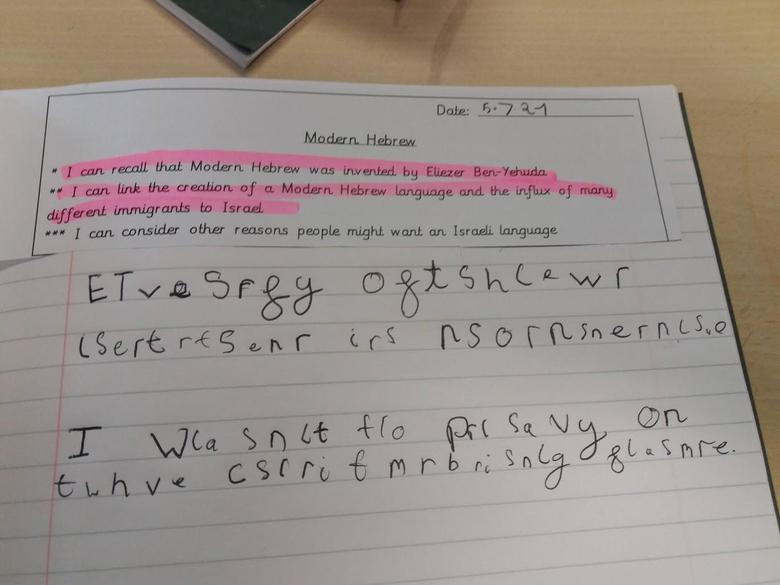 In Year 2 as part of our learning about gratitude we focused on Birkat haMazon/bensching. and created a menu of our perfect meal. We made sure to include where the food comes from:

In Year 3 we have been tackling the history of Zionism pre-1948 - as part of our learning about successive waves of immigration ("first aliyah" and then later a "second aliyah" and a "third aliyah"), we drew what we thought the British Mandate of Palestine would look like at each of these points. 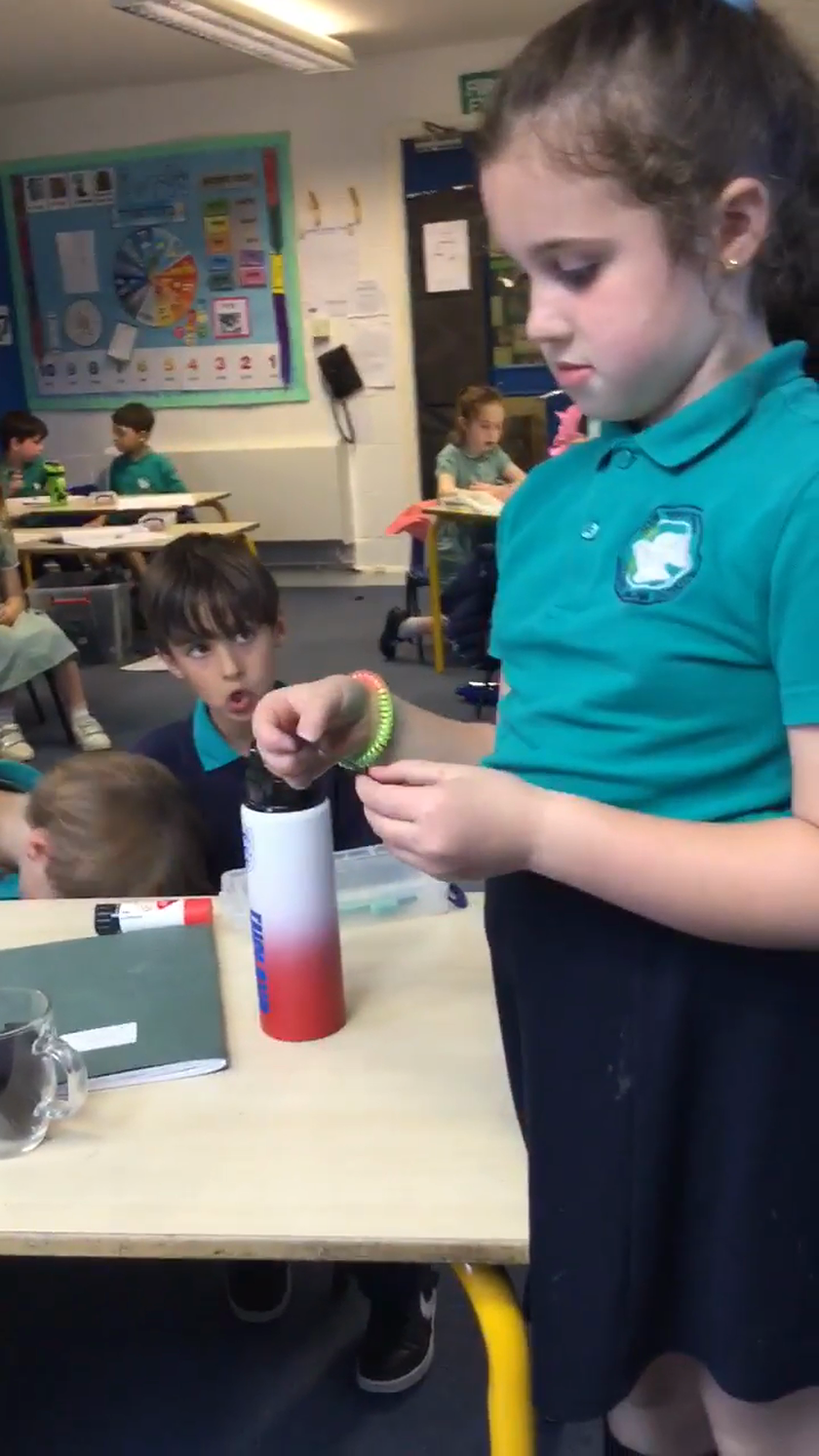 As part of Year 6's thinking about growing up and maturity, and transition to secndary school, we are learning about b'nei mitzvah. We wrote an imaginary diary entry pretending that it had just been our bat or bar mitzvah, which really captured the class' imagination - here are some of the entries:

In Year 5 we are looking at a synagogue service. We started off with thinking about what different prayers mean and what prayers are for, and we all got out our siddurim to help us with the matching task!

This half-term in Year 4 we are learning about the Messiah (Mashiach) and the Messianic Age. We considered the traditional idea of a single person being the Messiah and the Progressive Jewish idea that there would be a Messianic Age. To help us think about the difference, the children drew two scenarios: one of a difficult situation in which the people waited for someone to come and help, and the other of the same situation where the people helped themselves. Here are some of the pictures:

In Year 3 we are learning about Early Zionism. We started off by thinking up our own "pros" and "cons" of having a Jewish country:

In Year 1, we celebrated the end of our unit on Modern Israeli Culture by making an Israeli salad. We included parsley picked from Clore Shalom's very own herb garden!

In Year 3 at the end of our unit about blessings we composed our own blessings about things we are thankful for.

In Year 4 at the end of our unit on Birth and Death we thought about different religion's views of the afterlife and different views within Judaism. We acted out the Parable of the Long Spoons (or as we told it, the Parable of No Elbows) and then wrote a paragraph about the story.

In Year 6 to conclude our learning about the Holocaust we looked at heroes who helped Jewish children leave on the Kindertransport. We watched a video about Sir Nicholas Winton and used Holocaust Education Trust materials to learn about other heroes such as local refugee committees and foster parents, as well as the parents who sent their children onto the Kindertransport.

In Year 1 we have learnt how to find Israel on a map.

In Year 3 we learnt about food blessings, and matched up different blessings to the types of food they belong to.

In Year 2 we learnt about Jewish Golden Ages such as those in the Netherlands from 1600 to 1900. We thought about how Jews had lived in the same place for such a long time because it was welcoming, and drew pictures of what makes a "house" into a "home".

Year 1 are looking ahead to Chagigat haSiddur, their ceremony of receiving their very own prayer books, which will be in the summer. We prepared for this by starting to learn Modeh Ani, the very first prayer in the prayer book. 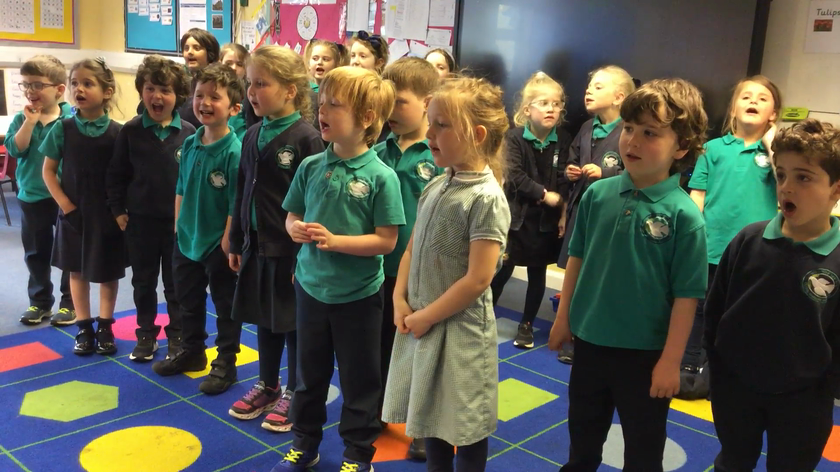 In Year 2 we created some excellent story maps of the story of the Golem as part of our learning about a Golden Age of Jews in Prague. 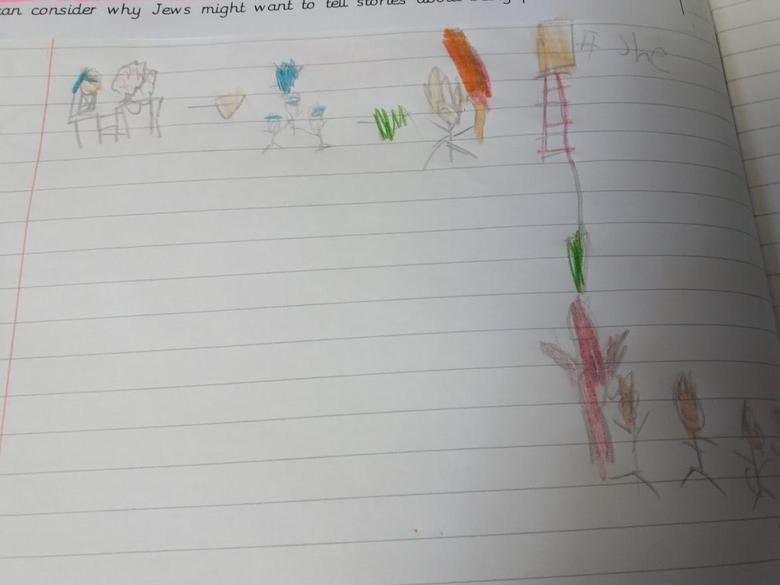 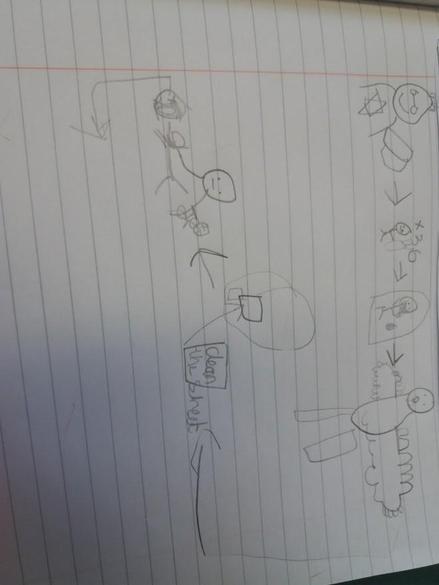 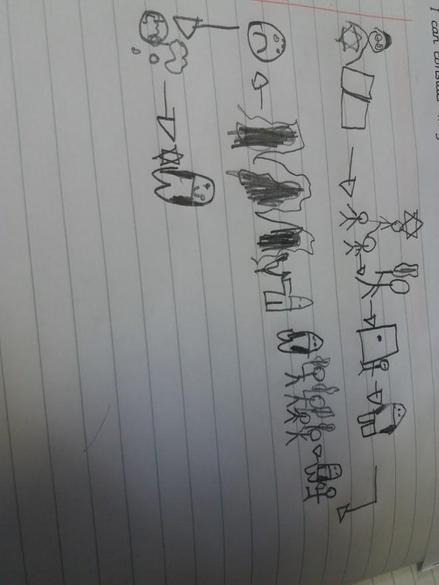 In Year 5 we have been thinking about the geography of Israel and how that affects both where people want to live and how battles are fought. We looked at a map of the physical geography of Israel (showing seas, mountains, deserts, and so on) and chose which place we would like to live if we were going to live in Israel. We added how this place might be vulnerable to or protected from attack.

In Year 4 we have been learning about life cycle ceremonies in Judaism. We had a sensitive and mature discussion about some features of funerals.

In Year 5 we are learning about modern Israeli history -- this week we focused on the Six Day War and its key events. Along with the Jewish Studies learning we used our map-reading skills and our Maths to calculate lengths of time from dates!

Year 6 have been learning about the Holocaust this unit, with this week being on Jewish refugees to England, and the Kindertransport.

In Year 1 we learnt some Hebrew words as part of our unit on Modern Israel. We learnt to say "Hello" (shalom), "Water" (mayim), "Flower" (perach), and "Shirt" (chultza). We listened to a Hebrew song!

In Year 3 we are learning about blessings at the moment. We coloured in some pictures of special parts of nature which some Jews make blessings on, such as:

We wrote a little about the link between the blessing and the natural thing.

Unfortunately not the ones with chocolate chips.

Some cookies are necessary in order to make this website function correctly. These are set by default and whilst you can block or delete them by changing your browser settings, some functionality such as being able to log in to the website will not work if you do this. The necessary cookies set on this website are as follows:

Cookies that are not necessary to make the website work, but which enable additional functionality, can also be set. By default these cookies are disabled, but you can choose to enable them below: